Decided to get a change of scenery so off by taxi this morning to a little quiet beach place called Cha Am. its about 4 hours taxi ride from Bangkok. Was going to get the train but got a quote of £30 so thought theres no point having the hassle of getting to Bangkok train station then carting my stuff on a train, when I can get an air-conditioned taxi instead for £30.

Yesterday sunbathed all afternoon, as wanted to get what is left of it as I think it's going to be a little wet this week....then last night went down Soi 8 Sukhumvit for something to eat, very busy and very nice food. I was sat on my table and the floor area was raised up (I now know why), the restaurant next door I realised had the same raised up floor, didn't occur to me why, until I realised this was the local 'rat run'...they were huge...entertaining if nothing else!!

However, the most exciting thing that happened on Saturday, I found my bug stall. So bought a few lovely little creatures to eat. Got some grasshoppers and some small beetle type bugs.....gorgeous!! 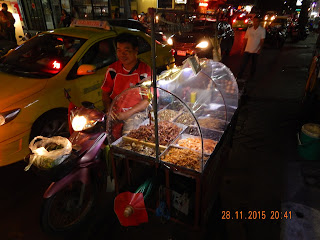 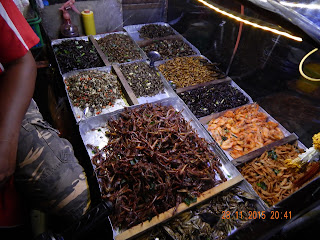 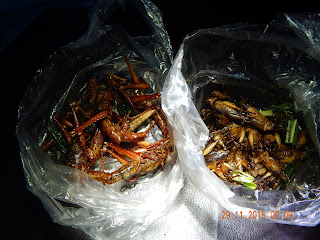 As you can probably tell by my title, decided to pay my respects yesterday to Erawan Shrine (Thao Mahaprom Shrine) in central Bangkok, the location of the awful bombing in August this year.

I didn't know quiet what to expect, either in terms of would it be busy or were people staying away, however I found when I arrived the most strange sense of eeriness, but also it appeared to be a place were life is just continuing, which always amazes me with the lovely people of Thailand. Whatever tragedies or life situations come in their way, they always seen to just carry on regardless.....

I stayed for around 1 hour taking in all that had happened and was happening here, mainly Thai's were giving their offerings of flowers and even though people think I sometimes don't have any feelings!! watching all that went on here made me a little emotional, and after what others have gone through, thats understandable.... 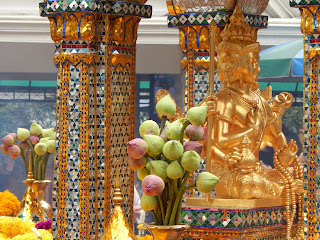 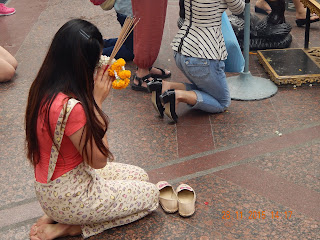 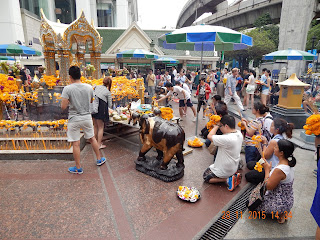 Got up late due to jet lag, thought I had just fallen to sleep then realised due to the sun being out, it was 12:15 in the afternoon and not in the morning....oooopppps

Anyway having missed breakfast, decided to go and have a look at the pool (see pics below). Got more hot and sticky so then went to order a Aroma Massage in my room. Got someone to come to the room as it only costs £1.50 more so thought it was less hassle.

After ones massage which for about £7.00 for an hour it was very good, although think I fell asleep because as soon as she started she said was that ok, so must have missed the bit in between!

Then off to tea at my favourite English pub on Soi 23 called Queen Vic, although there wasn't any sign of Barbara Windsor! Had stir fried pork (again)...(see pic below). It was then about 8pm so came back to hotel by walking for an hour up Sukhumvit, which if anyone has done before, you get nowhere fast as the path is full of little side stalls, makeshift bars, and Ladyboys who wish to wake up with you in the morning (Mother and Sue please take note!!! I said no to them all, even though most of them were more beautiful than the average female in England)

Then went to bed......but woke up a few minutes ago, must have realised I had not done my little blog, so thats why I am going it now.... 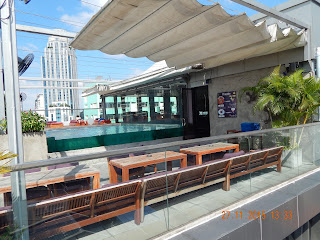 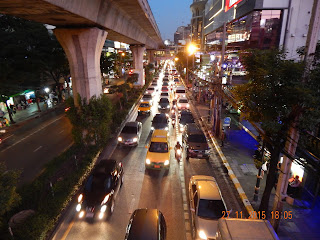 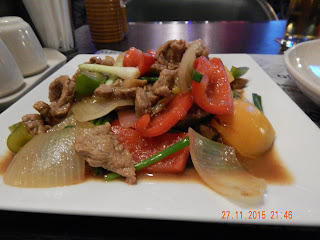 Too hot to stay outside, although I have been travelling for 24 hrs and 5 minutes so to arrive in 36degrees and feels like 100% humidity.......it's hot

Anyway enough of it being hot (did I mention that?). Had my customary pedicure at some little massage shop, cost £3 for an hour which I thought was very reasonable, although lady that gave me my pedicure was about 103yrs old, she knew what she was doing, but I suppose she has had plenty of practice over the years!!

Then booked into Hotel about 2 hrs ago. Off for something to eat as starving, although think it may have to be something normal like Thai Pork Fried Rice with fish sauce......think I will leave the odd looking creatures for another day!!

Thats about it really, didn't get up to much on the plane apart from being entertained by my neighbour  who decided to drink a little more wine than is good for you whilst on a plane, and trying to change your clothes in the gangway!! ...yes she fell over...twice!!

Off for something to eat now so see you tomorrow..

Sorry no pictures yet, although took a little video whilst in taxi approaching Bangkok.....

Just in case anyone interested  on my little trip to the Land of Smiles....my visit will now just be in Bangkok as I have decided that there is still so much to see in this amazing capital of this wonderful country......I have decided there is no point this time in travelling to any other parts of Thailand....

Korp Kun
Posted by Unknown at 12:21 No comments:

I hope to be posting some YouTube video's whilst in Thailand, so just practicing posting one I took 2 years ago whilst in Chiang Mai, in northern Thailand.....

Not long now before one visits the 'Land of Smiles'.....I have started putting an itinery together which looks like......

From Thursday 26th November to Monday 30th November will be in Bangkok, and hopefully will be visiting some of the following, what I don't get to do, I will visit when I return to Bangkok on 7th December for 6 nights...

On 30th November I will then travel probably by taxi or train to Hua Hin for 7 nights, which is about 3 hrs travel time from Bangkok, it's a beach resort famed as the holiday destination for the King of Thailand. Just a few things on my list to do...

Then back to Bangkok for 6 nights before go home, a few more things I am hoping to do...