As you can probably realise from the title, not done much today! My list of thing to do consisted of..


So 1st on list, breakfast, which as normal...Full English...sorry Sue, I know I aren't allowed a Full English everyday, but they don't sell Alpen here in Thailand otherwise I would have that instead, honest!!! 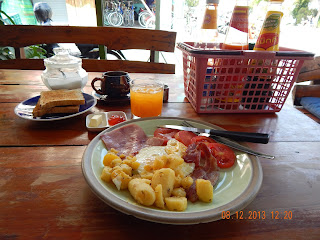 So breakfast done, very nice it was as well, all for B100 (£2). Then off to my haircut and pedicure. I have shown a pic below of me, but not wanting to upset my lovely mother, haven't shown me with my head shaved. She thinks her only son should have hair, so it will grow by the time I get home...honest! Reason for pedicure is tomorrow I am having a 5hr foot massage course so thought if someone is going to have to train on my feet best have them looking the best I can! So hair cut was B100 (£2) and pedicure B150 (£3).
After that it was about 4pm so popped into a bar for a small beer then had some tea, which consisted of,  yes yet again pork stir fry with garlic....yummy 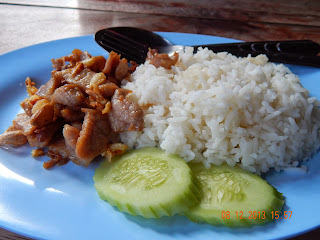 My pork and garlic stir fry...


Anyone who has been or thinking of going to Chiang Mai, on their list of things to do is 'Sunday Market' which happens...yes, on a Sunday! A road approx 1 mile long is full of stalls on both sides selling all things Chiang Mai....been before, but as I wanted to get some nice presents to take home to my loved ones, I thought this would be the best place...WRONG!

I arrived at about 7pm (open from 5-11pm)....and it was busy! When you approach it from a side street, you then join the many thousand people who have also decided this is the place to be! When you join the street, you then have to move with everyone else, also in the same direction, you can't go any faster, and you can't slow down, and god forbid anyone who wants to stop and look at a stall, as no, this knackers everything up, as you stop everyone moving! So I joined the throng of tourists (ok I was a tourist also, so no different), then continued for about 30mins until I got to the end, then the only thing you can do is either leave, or come back on the other side. So I came back! So another 30mins of moving with thousands of others, not really achieving anything other than realising there must be 100 better things to do!
Anyway, I then saw in front of me, the place I entered. Unfortunately it was at the other side, so I decided to be brave and at the precise moment, I then decided to do what no-one else either dare or didn't know you could do, I moved across the incoming hoard of tourists. But after keeping going I
managed to get into my little lane I arrived on, out of this awful experience, that for whatever reason, they say you have to do!!!
After what was probably one of the worst hours here, I went back to my little bar for a beer and some tea. Didn't manage to take any pictures of the 'Sunday Market'...as didn't even attempt to try and take my camera from my backpack!
So sorry loved ones, the present I promised will have to wait until another day!
Anyway just before I got to the little bar, I found a little stall that sold Quail eggs, so bought 8 (to keep me going as was starving after my traumatic experience). 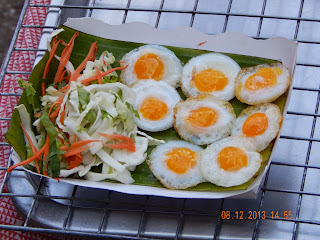 My Quail eggs...thank you Quail!

Just in case tonight I was a little hungry in my B&B, I stopped and bought some crisps. Don't know whether this is Thai for Walkers, but at B20 (40p) a packet thought I will try them even though they were a little expensive compared to other food prices here. I have since tried the one in the middle, lime fish, chilli and ginger......amazing, hopefully if these aren't Walkers, they will decide to copy
these in England...heaven! 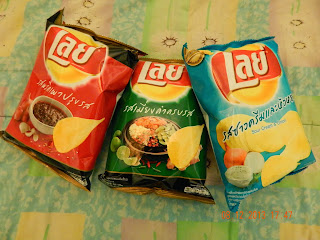 This morning I was walking around Chiang Mai for a while and saw in the distance this Wat, I think a great contrast with the building next door, so I took a picture! 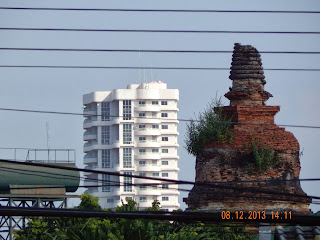 Anyway, just for my lovely mother, here's a picture with my head shaved....oops, forgot to remove my cap! 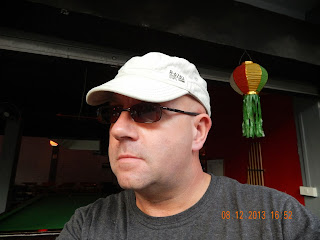 So sat now in my B&B, it's 11:30pm and football on TV (Arsenal v Everton), so will watch that for a few mins, then bed, as want to be awake for my foot massage course, as my lovely girlfriend Sue is now expecting free foot massages when I get home, so I will do my best to learn as much as I can tomorrow so hopefully they are nice for her!

Finally thankfully I am here in Chiang Mai (not thankfully instead of being at home, but thankfully instead of being in Bangkok) as tomorrow all of Bangkok comes to a standstill, as the yellow shirts who are against the present party in power, have asked for all Bankokians to descend on to the streets in protest, and that could mean millions of them, but hopefully it's only for 1 day, as their leader stated that tomorrow will be the last day of protests, so it's either win or loose, depending if they achieve their goal of overthrowing parliament! ...just thought I would update you on the situation should anyone be interested!