I won't go too much into what happened last night....but it started with I am assuming, last nights meal (picture on previous post)....
I got back to my B&B which was only 2 minutes away, and although I had a beer with my meal, I didn't half feel awful walking up the stairs. However managed to do my plod post, then wasn't very well....
Won't go into the finer details but had my head in the sink for what appeared like hours. Then followed the longest night ever....as no sleep until about 6am....thought I was dying!

Anyway at 8am I woke up and didn't feel too bad, so 2 Redbulls later, off I go to my drawing course.

On arrival I was met by this lovely lady artist, who sat me down at a table. Also in the room were about 4 other 'would-be artists' who having looked at what they were drawing, made me feel like, what am I doing here!!!

So my tutor comes to my table, plonks a sheet of paper down with a pencil and an empty coke can, and says draw that!.... It must have been the blank expression on my face that made her think I needed a little guidance on this matter! So guidance I got, and nearly 3hrs later I finished my first masterpiece...... 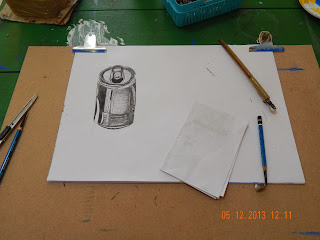 I am now that much into this artistry thing that I am going back tomorrow, this time I am on watercolours, so that end result should be an even bigger laugh for you all. Anyhow, after I had finished being amazed at my first step to being the next Picasso, I then went for a walk to the local market, as didn't want to do too much in the way of exercise due to the previous nights happenings after I ate my chicken, as still felt a little frail! The picture below shows a stall selling little plastic bags of Thai food for B10 (20p). 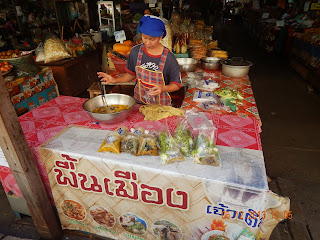 The other day I passed this stall and said I would have one of these for breakfast, however this time the one in the middle was still alive as it was still moving, so I may leave this now for another time! 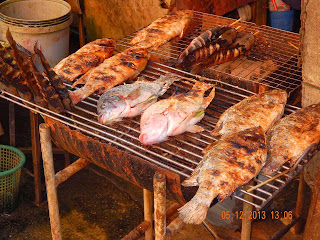 Finally for today, an amazing fruit stall. You may notice the pink eggs at the top right in the picture, it appears they are called 'horse piss eggs' mainly because they smell of horse piss. I asked why they smell like this and I was told that they are many years past their sell by date! .....Another thing I won't be having for breakfast. 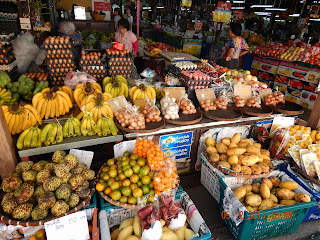 Tonight will be an early night, as most of were I am is closed. It's the Thai Kings birthday today, so none of the bars are open, anyway an early night will do me good.....then tomorrow at 10am it's back to the 'drawing board'.....