Today hasn't added to my touristy things I have visited, mainly because don't want to spend any more money so had an easy cheap day. Had breakfast (free) then went to the swimming pool I found and stayed there for a couple of hours (also free), there was some expense as got a 'sorng-taa-ou' which is a small red pick up truck fitted out with 2 benches in the back facing each other, as I went to a restaurant for my lunch I saw as I was walking around last night. The 'sorng-taa-ou' was B20 which is 40p, and my lunch B120 (£2.40) which was a bacon, cheese burger, fries and and a coke, as decided that at least once a week you need a burger. 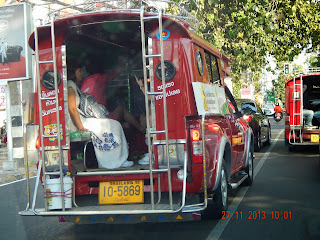 
Then off to my free massage for 2 hours, thought I would have another Thai Massage, but with a different masseur, so there were 2 available, I thankfully was given the more petite masseur, my thinking here is that with a Thai Massage, there wouldn't be as much pain....wrong!!!! It was yet again amazing, putting my limbs in places that limbs aren't supposed to go, and more creaking than last time, however this time the very nice masseur decided (whilst I was laid on my front) she wanted to walk all over my back and shoulders, not once but probably 100 times, after even more pain and creaking of ones joints, how she didn't break something is anyone's guess, but I was reassured whilst it was occurring, that at least she will have had some training on not breaking things, mainly my back!
One feels rejuvenated, so off for tea, with a budget of  B100 (£2).

Finally for today, yesterday as I was at Tiger Kingdom I came across, but thankfully a wire fence this time between us, as he did look very menacing, saw a White Tiger, it was beautiful...... 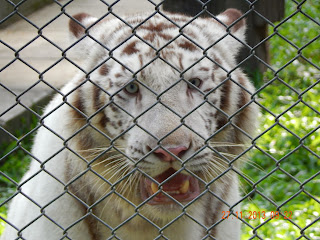