Well, thought I would do a little sightseeing today as the next few days whilst I have a free swimming pool, I won't be doing much, but will still write a little of what I have been up to.

One of , if not the most famously known Wat in Chiang Mai, is Wat Phra That Doi Suthep. So off I went with my tour guide Rattana, on the 30min or so drive up a very steep mountain until we reached the wat.

We went up in cable car as the steps up count over 300, and as I aren't as young as I once was, decided to take the easy option. The wat itself was amazing. It was built by King Keuna in 1383. I also whilst there took a prayer in front of a monk, whilst on my knees and praying, I was then given his blessing whilst been splattered by water, this was to give me good luck and also to grant me my wishes, so we will have to see on that one!!

The wat is placed high up on the hillside above Chiang Mai, and was worth the visit. 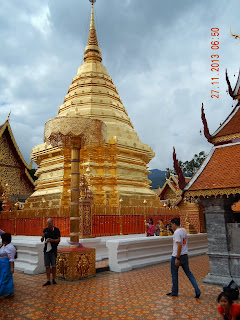 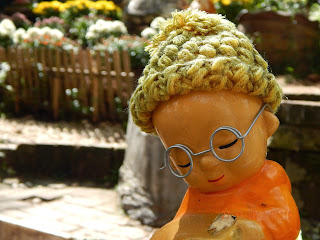 A lovely little Buddha image at the Wat

Off then to a place that wasn't on my small list of things to do in Chiang Mai, I visited Tiger Kingdom. The reasons I hadn't wanted to was firstly I thought it would be a little too commercialised,  and secondly, never really thought it would have been too good for my health to get too close to a tiger, in a tigers cage. There have been stories of people being eaten doing the same thing, so one was a little apprehensive.

However my guide Rattana seemed to think that it would be good for me, probably because she didn't was me as a customer anymore....anyway I was wrong!

Actually walking into a cage with a tiger, was a little not good on the old heart beat, but I was reassured by the presence of the man with us who had a little bamboo stick in his hand!! So cuddled the tiger I did, played with his tail, and rubbed his tummy.... and thinking back now, it was an amazing experience, something that I would definitely love to bring Sue my girlfriend to experience in the future, not because I want her eaten by a tiger, but because I know she would love it...so that's something for the future. 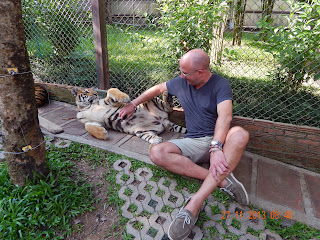 Me stroking the cute tigers tummy!!!

Anyway best go have some tea. Had for lunch today pork with ginger, so I will end today with a picture of food my lunch (thankfully not me being the tigers lunch)...lovely! 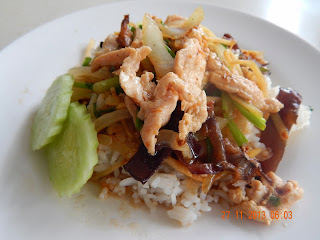 My pork with ginger!